This is one of those stories where the standfirst tells you everything you need to know:

Jones accused Mueller of participating in child rape and pantomimed shooting the special counsel. Facebook said the rant did not violate its community guidelines.

Yes, it's the Infowars/Facebook axis. For those playing catch-up, Facebook founder Mark Zuckerberg has defended the conspiracy theory-centric site's continued presence on the network on the basis that people have the right to air opinions, even if those opinions are factually inaccurate.

However, he was clear that a threat of violence would be enough to see content removed:

Then, there’s keeping the community safe, which I think is really important. We’re not gonna let people plan violence or attack each other or do bad things. Within this, those principles have real trade-offs and real tug on each other.

The interesting thing about this situation is that Infowars (peddler of genuine snake oil) and its head Alex Jones couched the threats of violence and accusations of aiding and abetting pedophilia in a pantomime of a wild west style shoot out. This feels like a deliberate provocation in light of the interview linked above, playing with the idea of violence against Mueller, without explicitly calling for it.

However, when accusing someone of pedophilia without a shred of evidence doesn't violate "community standards", you really should be asking yourself what your standards actually are… 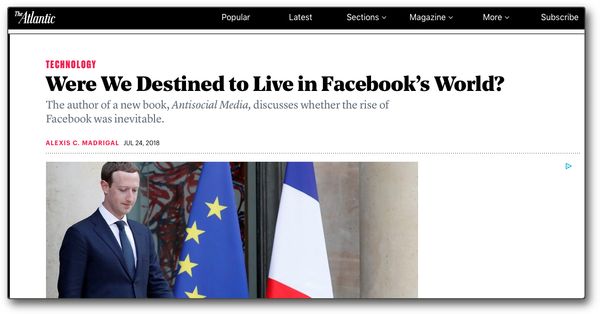 Siva Vaidhyanathan, professor of media studies at the University of Virginia and the author of Antisocial Media: How Facebook Disconnects Us and Undermines Democracy, has some compelling theories on how Facebook became whaat it is.

Twitter has fallen a very long way from its roots as the place where you went to find out what was happening - and to discuss it. If it's just about an elite telling us their thoughts, does it really matter all?