The fashion designer has embraced technology, sketching on an iPad and having more iPods than anyone could imagine…

It’s a surprise to have a tech conference kicking off with an icon of fashion. But Karl Lagerfeld has some surprises for us. He sees himself as very “different from the marionette he has become for the rest of the world”.

Despite being a self-proclaimed “paper freak” when it comes to books, he’s a fan of the iPad because it allows him to work, sketch, and send them back to the studio. He carries four different iPhones with him, with certain people only allowed to call certain phones.  “It’s not one per person, I know more than four people”. He has a bunch of iPod Nanos with the mixes of the day on them. He has hundreds of iPods with different compilations of music he creates, and he annotates them with the date so he can go back to a particular period.

iPads? He uses them as sketchbooks and diaries and photo books. He has several for different subjects and ideas.They’ve put his iPad up on the screen, and it’s packed full of videos and photos, for inspiration or demonstration. He showed us a short video advertising a handbag. 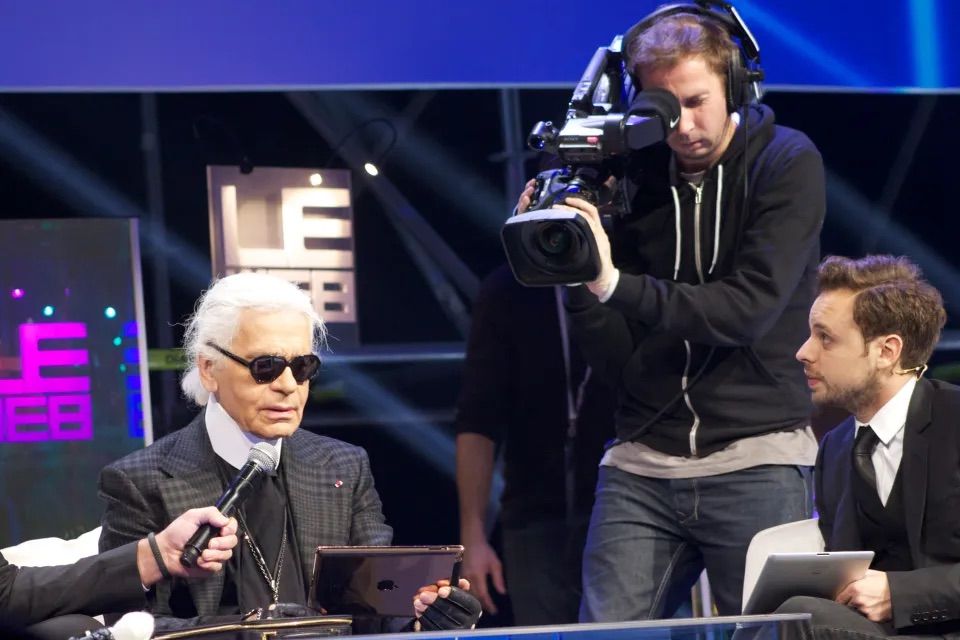 He finds sketching on iPads to be “very like engraving”. He’s working on an illustrated book only with iPad sketches. He shows us  a vivid sketch of Steve Jobs that he did this morning – he’s a last minute person, he claims – “once you understand the system it is very easy” he says. And he demos on stage. He uses a stylus with a capacitive touch end to sketch with. Although, it’s not working very well. It took a few attempts to ket it working.  Loïc is told off for “not really helping”. And now it’s all working and he’s sketching himself on an iPad, live on stage…

He’s not someone who believes in technology replacing things. He loves both his iPads and paper. They both have their place in his workflow.

Lagerfeld claims to be “very, very grounded”. And oddly enough, I believe him, as far as someone can be with his wealth and fame can be…

And now Natalie Massenet from net-a-porter is on stage, and announcing the launch of a new collection called Karl, designed by Karl Lagerfeld, and available online exclusively from January 25th 2012. Prices are “for these times” – jackets from about £150. Some amazing evening dresses for more.

“Fashion today comes from a lot of pieces, it’s not a complete look. New things spice up what you already have. The approach is more casual because things are less expensive,’ says Lagerfeld.

Lagerfeld doesn’t teach – he dismisses the idea, and tells the story of a friend whose husband was having an affair. She water up for him, and then just said “teach me what she taught you”. He doesn’t do that…

So, how does he learn, asks Loïc?

“I have my eyes wide open behind my black glasses,” he says. “You have to be curious. And you have to adapt to the changing world. It does not adapt to us, I am sorry.”