Vale, Movable Type: a big move for this blog

Moving from Movable Type to WordPress

If you’re reading this, I’ve pulled off a technical challenge I’ve been putting off for years – literally years – now. This blog is now running on WordPress, rather than Movable Type.

It’s not been an easy move – and I’ll outline the process in another post – but it’s now complete, and this site is living on a new host, running new software in the background. And I’m excited to get blogging with the new setup.

Here’s why I moved.

Movable Type, contrary to popular belief, is not dead. It’s alive, well and still being developed by Six Apart – which is now a Japanese company. However, in the English-language world it’s largely being targeted at the corporate and professional market, with a price tag to match: 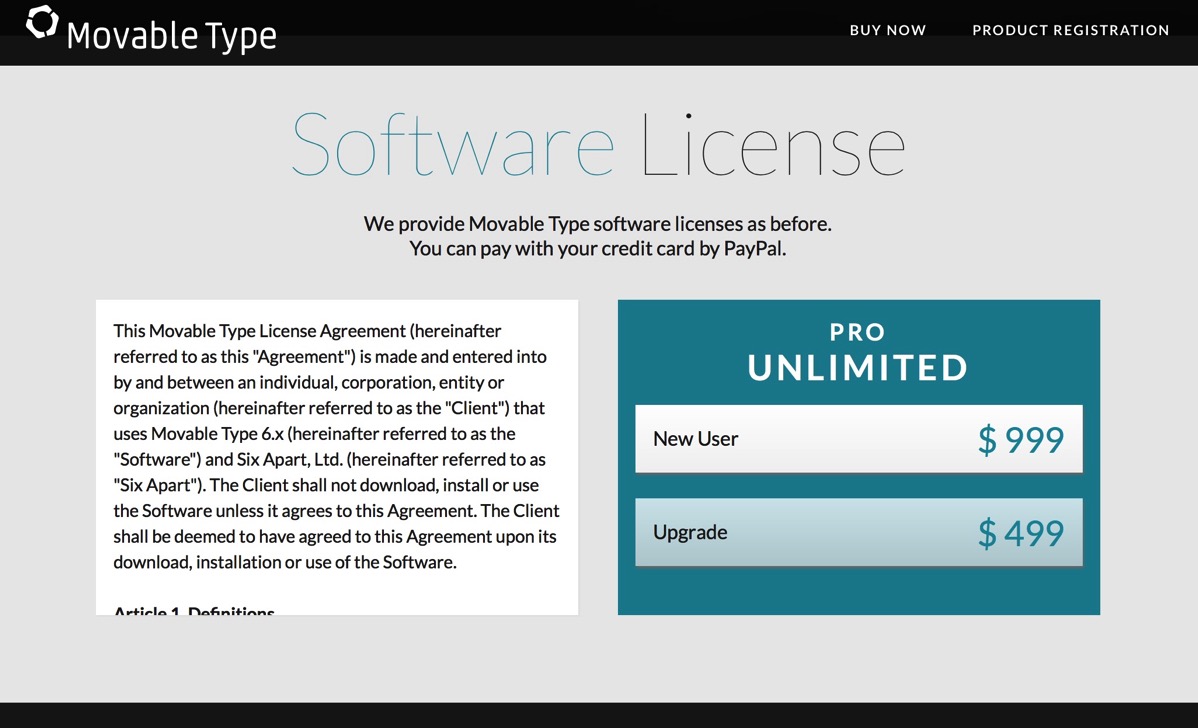 So, I’m not moving because it’s dead. But I am partially moving because I don’t want to pay more than £300 every couple of years for a new version of the software. The advantages MT offers don’t outweigh the price difference between free and £300.

The need to experiment

I’m also moving because my web host was getting more and more grumpy about me running it on their servers, and I came to the conclusion that if I was going to go to the bother of shifting hosts, I might as well shift platforms as well. Because, as alive as MT might be, it’s not well-supported. Try finding themes for it. Or new plugins. Or even other web services that support talking to its API. They’re becoming vanishingly rare.

Increasingly, being tied to MT was stopping me experimenting with new tools, and I don’t like that feeling. Part of the joy of blogging for me has always been in the experimental aspects of it – playing with new pieces of software, and figuring out how they might help me publish better. To keep that feeling, I needed to move on from the comfy familiarity of a blog platform I’d been using for over a decade.

Five years ago, much of my working life centered around MT. No more. I have no clients using it, and a whole bunch of them working on WordPress. I really need to understand it much more deeply than I do – which is why my most-used blog needs to be on it. If nothing else, that will force me to explore its quirks and advantages.

And I’m just one of many sites making the move.

That, incidentally, is why I’m on WordPress rather than the platform I suspect I’ll move to next – Ghost. Ghost is still very young, and needs some more development before I can switch. But I value this time getting to know WordPress, too.

So, there we are. New One Man & His Blog, living in WordPress and hosted on WPEngine.

What do you think?

I can finally blog natively in Ghost via Safari on iPads, thanks to changes in iPadOS.

I've just updated the Ghost CMS I use to run this blog to version 2.0 - and it's a little glimpse of the future.

The last big user of the first platform I used has quit: Livejournal is not what it used to be.

Ev Williams is full of a world of good intentions - but journalists who trusted Medium are paying the price.