It looks like Apple is killing its venerable photo and photobook printing service this autumn.

This morning, I sat down to start making a photo book from some of my lat Mum's old photos - and I got this pop up: 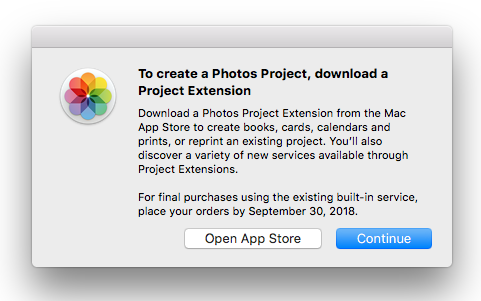 It looks as if Apple's own in-built photo prointing service is going away with the release of the next version of macOS this autumn. This saddens me, becaus ethat service has been there and useful through the days of iPhoto, Aperture and now Photos.

The suggested replacement - the ability for companies to create extensions for Photos - has not been well adopted. There's only a handful of comapnies offering them - and only one that offers photobooks.

Perhaps the writing was on the wall when Photos on iOS never got the printing functionality. But it looks like, in future, rather than using Photos itself, I'll be battling with the dedicated photbook companies' janky software.

Back from both holiday and a blogging break. Here's what's been going on.

Some images from a year ago - a quiet month, barring a quick work trip to Singapore.

Malayala Manorama and the flooding of Kerala

Kerala in India has been hit by devastating floods over the summer. A years ago I was over there, working with the journalists who are now covering the tragedy.