GuardianWitness: an interview with Joanna Geary

This morning’s launch of GuardianWitness has created some debate about what it actually is. The Guardian’s digital development editor Joanna Geary (friend of the blog 😉 ) was kind enough to give me a ring and answered some of my questions about the background of the service.*

First up: this was built in two months. The sponsorship pot from EE gave them a budget and time to get the job done, but not necessarily have everything they wanted at launch. She says it’s a complete, working system that can be built upon. I suggest the phrase “minimum viable product” to Jo but she suggests that it’s a full product – one that will be built on. Do they have aspirations for more integration with social media? Yes, they do. And it’s something they’re looking at as the system develops.

The key part of the development which is invisible to us right now is that the Guardian Witness system is deeply integrated with the Guardian’s CMS. Once the content has passed through verification, it’s available to the journalists, and they can insert it into a story or liveblog just by inserting an URL, which creates an embedded version of the contribution that links back to the contributor’s profile.

“The really exciting thing is not what you see now, but what you see when Witness is included in a story,” she says. It’s a tool to facilitate genuine collaborative working between the journalist and external witnesses. Jo says they’ll collaborate with people on the ground, or with expert knowledge, in any way they can – and already do, via phone and other traditional methods. This adds another tool for doing that. 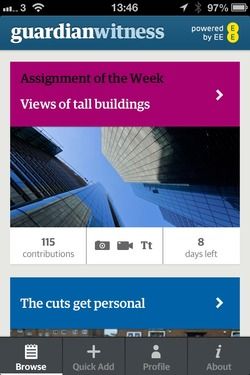 Verification is critical, and there are basic verification tools built into the system, that look at things like a photograph’s EXIF data and compare it to the claimed location, for example. Once something’s through that front line, it goes through a series of journalist-driven verification checks, that start at “is this a tall building or is it actually a hippopotamus?” and ends with detailed checking of the veracity of the contribution. “People suggest this is about free content, but it’s actually costing a lot in time,” she suggests – although she acknowledges that the issue of payment (or not) for contributions will likely be a point of discussion and criticism.

More than 100 journalists have been put through training around Witness, focusing on good stories for assignments and verification techniques, which was delivered by Jo and Claire Wardle. Jo describes the reaction from the newsroom as “exciting”, which, in my experience, is pretty uncommon in a launch like this. It’s a hopeful sign, if true. Generally it takes time and some successes to persuade the oft-skeptical journalism community that this is the right sort of initiative.

Jo is clear that she and the team are aware of previous failures in this space – that’s why they’ve so consciously steered away from tainted terms like “user-generated content” and “citizen journalism”. They are not, she emphasises, just creating a place for the community to talk to itself, or for The Guardian to grab free content, but a system that facilitates collaboration between professional journalists and The Guardian community.

Talking of the team – there’s some interesting talent on board. Phillipa Law is ex-BBC and is in the process of doing a PhD in online collaboration, while Caroline Bannock is a news producer from Channel 4 news. They’ve been working with both key community members and the journalists in the weeks building up to the launch to explain to them what The Guardian are trying to do

“We’re just getting started with it,” says Jo. “I’m really excited to see where it goes.”

The possibility of an Elon Musk-run Twitter has people heading for the doors. If we see a mass deletion of accounts, all of a sudden a lot of news stories while find crucial embedded elements at risk.

Are you tempted by shiny things syndrome?

Are we letting ourselves get distracted by cool new formats, rather than doing the really hard work of rethinking our journalism for the post-digital age?

The Times's deputy digital head has a great new newsletter. Here's why it's worth your time.