Digital News Report 2018: traffic from — and trust in — social media on the decline

The new Digital News Report is out - and things are looking grim in the intersection of social media and news. Here's a couple of preliminary observations.

The Digital News Report from Nic Newman et al at the Reuters Institute for the Study of Journalism was published today. I was due to attend the launch event this morning, but unfortunately childcare issues meant that I had to pull out a couple of days ago.

Luckily, Catalina Albeanu of journalism.co.uk was there, and has written up some key findings from the report, and some of the more interesting moments of the panel discussion.

Here's a couple of things that jumped out at me:

The least surprising news to anyone who works in audience engagement is that social media traffic is on the decline: 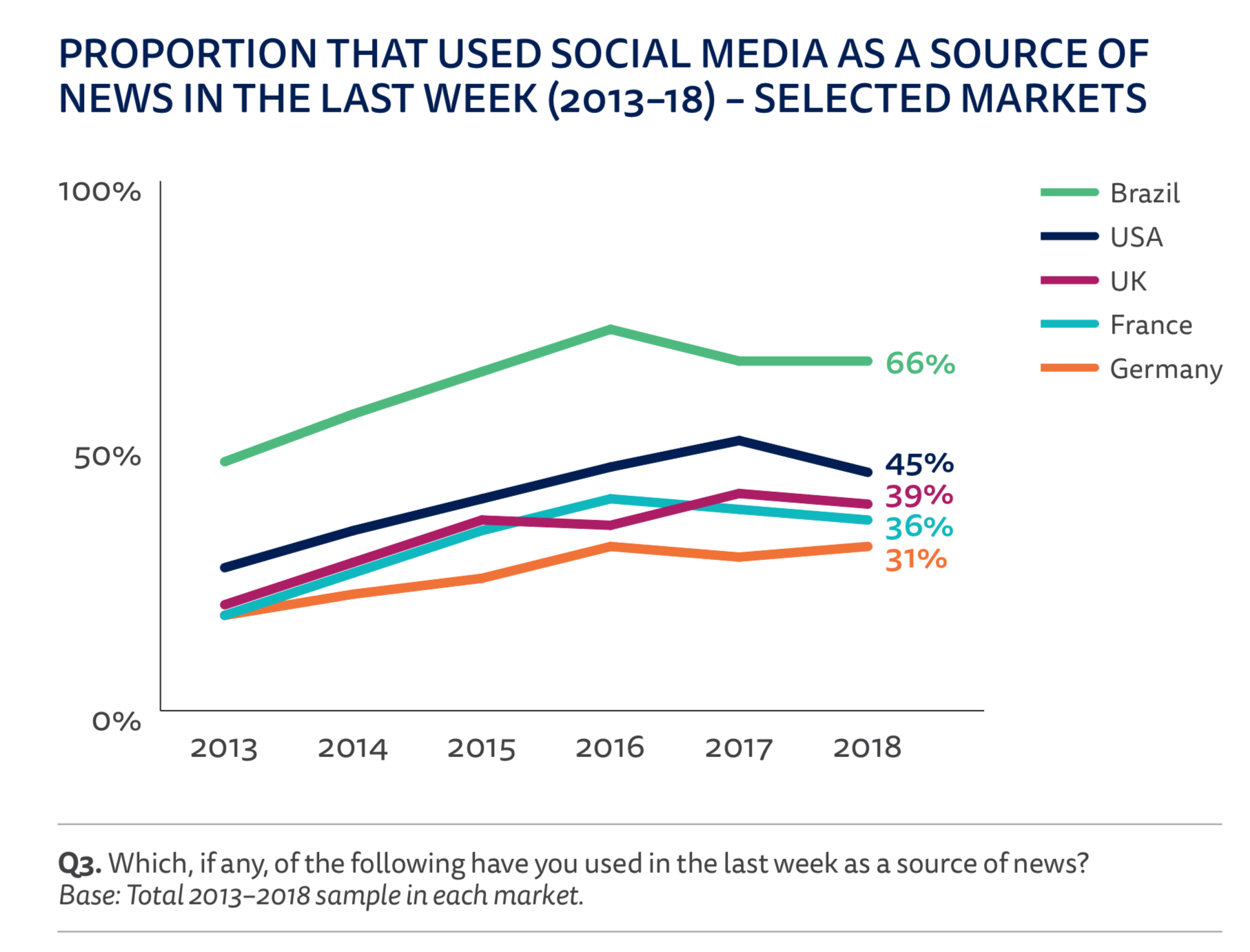 However this decline is largely driven by just one site: Facebook. Yes, the algorithm change is biting. However, it's interesting to note that use of Facebook for news has been on the decline for two years: 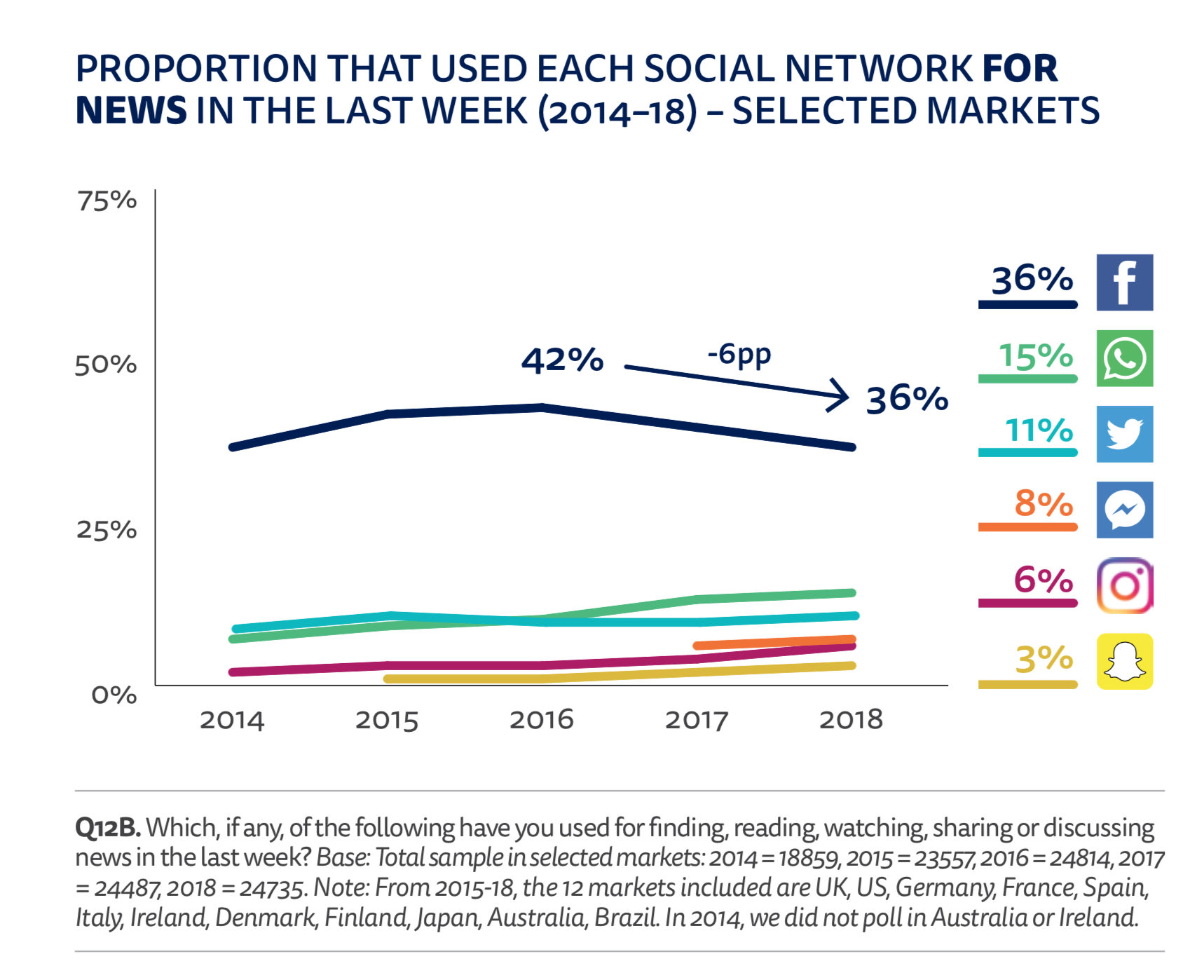 While other sources are growing somewhat, it's not enough — for now — to replace the lost traffic from Facebook. Curiously, though, many sites are portraying this as a switch from Facebook to chat apps (the BBC for example). The data doesn't quite seem to bear that out. At least some of the growth could be directly attributed to the growth in chat apps themselves, rather than direct switching.

This reflects recent data from news analytics platform Parsely, which shows significant drops in Facebook traffic - although there's some evidence that it may have bottomed out for now: 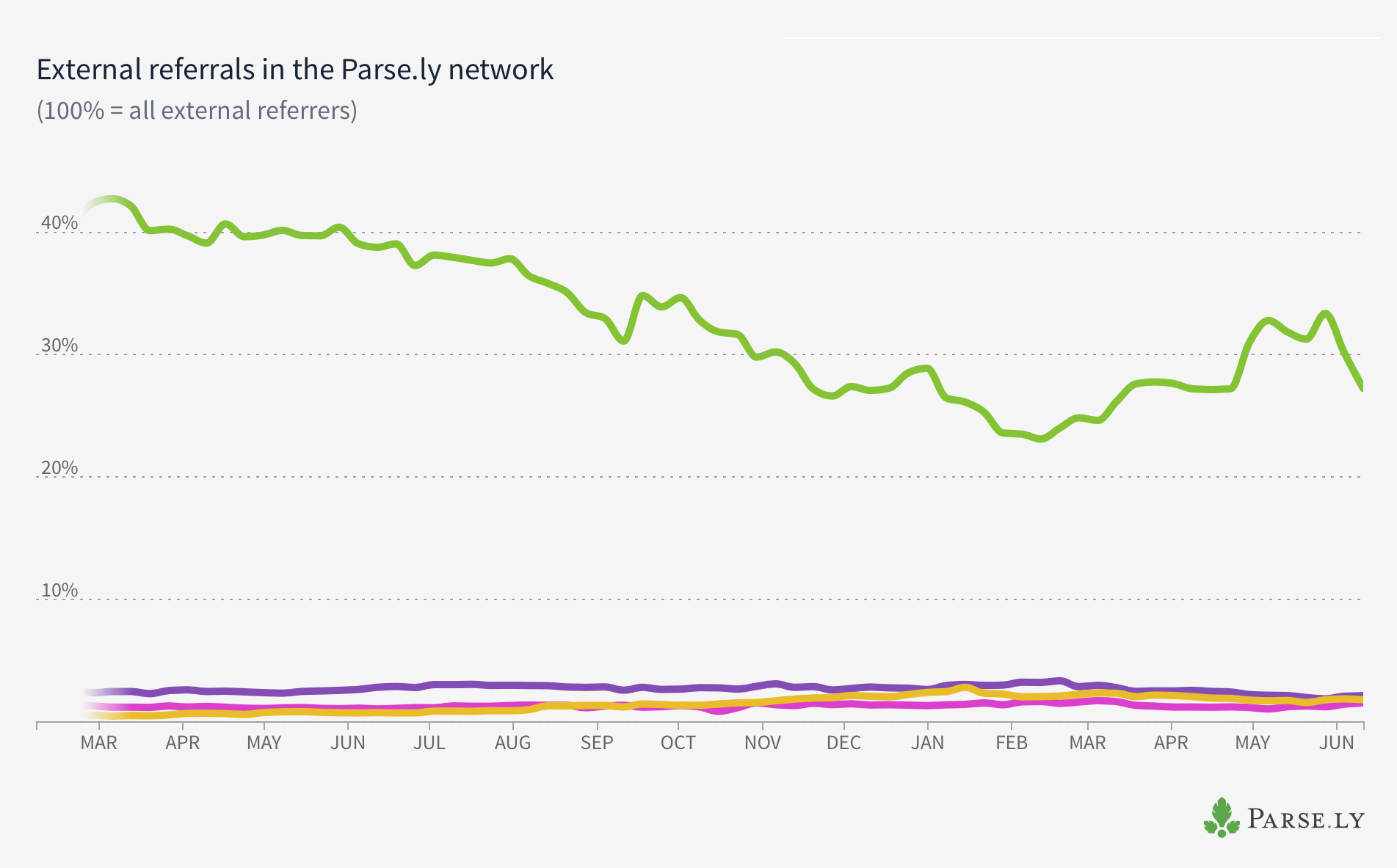 Yes, Facebook is the green in that chart. And that gives you some sense of how dominant Facebook is as a traffic source.

Media literacy matters – or does it?

This year, the report also measured media literacy for the first time, and found that levels of news literacy are much lower than many journalists might expect. The team asked respondents a series of three multiple choice questions, with only one correct answer: the first tested whether they could identify their country's public broadcaster; the second looked at who was responsible for writing press releases; and the third asked about how stories people see in their Facebook news feed are selected.

The results? Only 10% of people got all three right. This, perhaps, should not be as much of a surprise as some people find it. In the pre-internet age we, to some degree, outsourced our media literacy to a small number of professional journalistic outlets. Journalism was an expensive game, with the infrastructure of printing and distributing costing inaccessible amounts of money for most people.

In short, there wasn't a huge day-to-day need for media literacy because most sources of news we received were at least somewhat trustworthy.

That has profoundly changed. The internet has reduced the cost of distribution to, essentially, zero, which has allowed the proliferation of media outlets we've witness over the past 20 years, and the last 10 in particular. Why do people fall for disinformation disguised as news? Well, they're both not very good at understanding what professional news really is — and still prone to confirmation bias, the psychological trait which means we are much less likely to apply critical reading to thing that support our existing views.

In light of this, the decline in Facebook traffic might be good news. The misinformation and hyperpartisan sites are highly dependent on viral social traffic for their audiences. A decline in Facebook traffic would create a decline in their reach - but that presumes the Facebook traffic decline is evenly spread. With Facebook prioritising highly engaging shares, it's possible that more traditional and often more sober media will be hit harder than our less reputable and fact-aligned competition in the longer term. More research and a careful watching brief needed here, I think.

However, education in media literacy might not be the solution:

What the team found out however is that "news literacy may also go hand in hand with a high degree of scepticism. Even if we focus on news production, the more people know about how the news is made, the more knowledgeable they will be about its limitations and imperfections. This may be why we see only a very small increase in trust levels as news literacy increase."

This needs some consideration and investigation. How in-depth was this media literacy training? For example, did they address issues like the motivations for creating misinformation, or the role of confirmation bias?

Like many good reports, this looks like it's raising more interesting questions, even as it answers some more obvious ones.

I'll be digging deeper into the report over the next few days, and I'll share anything interesting I find as I go through it.

The launch event from this morning is also available online to watch, rather ironically on Facebook:

You can grab the report from the Digital News Report 2018 page.

We need to get better at integrating the impact of the climate crisis into all our journalism. And a new initiative from the Reuters Institute should help.

Digital News Report 2021: a good crisis for the media?

Four European journalists discuss the findings of the latest edition of the annual research into news, and how it compares with their own titles' pandemic experiences.

When less journalism is more

The shift to digital unleashed the floodgates on a tidal wave of journalism of often variable content. And, finally, publishers are discovering that smaller amounts of more valuable work can be better.

Digital News Report 2020: the trust crisis and its solutions

2020's edition of the Reuters Institute Digital News Report is dominated, as you would expect, with the changes wrought by the pandemic. But there's an underlying trends that's worth focusing on.