Liveblogged notes from a session at LeWeb London 2012

Jamie Oliver and Kevin Systrom have got to know each other through photos – Instagram photos, specifically. They’ve got to know about each other’s families, about tastes in beer…

Twitter is great for getting messages out there and stirring the pot, suggests Oliver. It’s also good for engaging local communities. Facebook is like a website, and people scratch deeper there. Instagram is an “amazing was of democratising being creative”. There’s something about Twitter that can be quite poisonous – it’s very bitchy. Jamie has so many followers, he gets worried if he doesn’t get thousands of likes quickly. And he finds the press don’t steal Instagram images as much as they do TwitPics.

Kevin finds that brands who are most “true” on Instagram get the most engagement. He recommends that you follow Burberry on Instagram to see how to do it well.

Jamie thinks Pinterest “makes crap look good”. He uses it, but it bores him. He spends about 15 minutes a day scanning through social media stuff – but he has a digital team.  The stuff that works is emotion and recipes. “The internet is about being generous” he suggests – the make-up girl at Le Web has bought none of his books – she gets the recipes from the internet. But he think it all contributes to the sales. 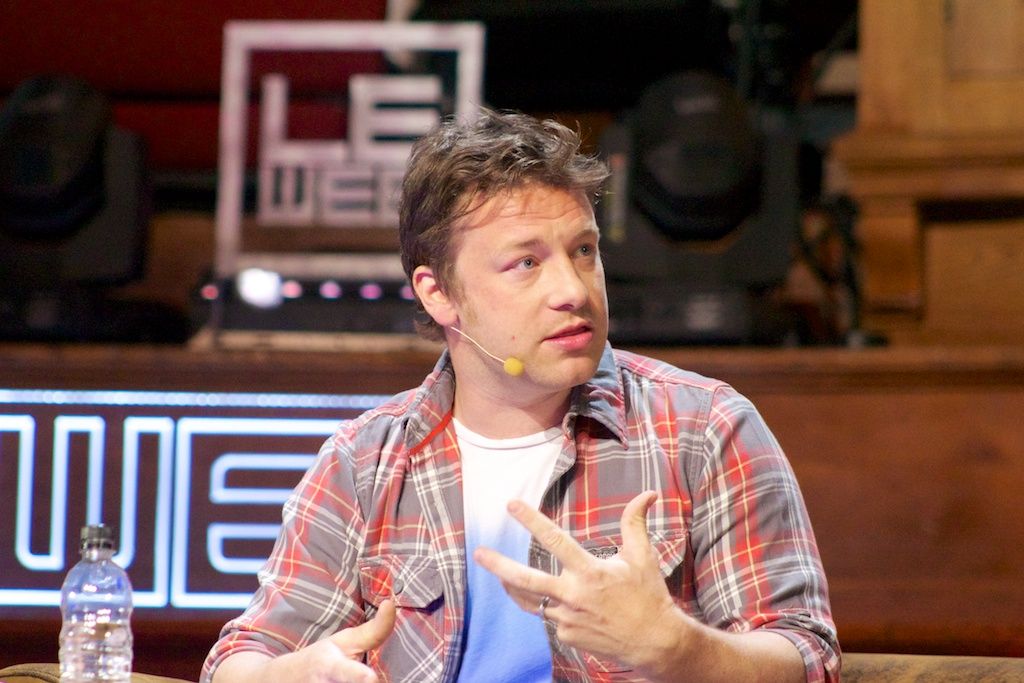 Jamie likes being able to delete “junk” comments on Instagram, but dislikes the “trail of shite” that idiots leave behind on Twitter. He praises Instagram for leaving an open API to allow other people to build businesses on top of the services, particularly around printing and making of physical goods. Jamie Describes this as a “generous spirit”. Neither of them are convinced that video has been done right yet, but they think there’s a possibility there. Kevin suggests the value of Jamie teaching you how cook an omelette, but Jamie thinks it would have to be very short.

Never Seconds – a blog written by a nine year old girl about school dinners – was a good trigger point for restarting a discussion about nutrition in schools, that Jamie’s team were able to take advantage of. Pink slime was another campaign they for behind and got trending quickly.

“The food industry is as corrupt and filthy as the arms industry,” says Jamie. He thinks the only hope is digital, because it allows communities to come together. The media can be fantastic he suggests – if they want to be. But the campaigning they do allow them to aggregate communities. The problem with measurement is that  “nobody does anything with it”. He’ll leave that to others.

“Boobs, pretty girls and dogs” is what’s popular on Instagram suggests Jamie. Kevin shifts the conversation swiftly to the idea that “honest” photos work, but they need to find better ways of creating channels of related content. Jamie points out that budgets for broadcast TV are massively down – 40 to 45% down, but new sources of money are emerging from places like YouTube.

More details of the session from Arne

5 tweets worth your attention this week

Fleets were fleeting, and there's a lesson in that

A feast of audience engagement reading